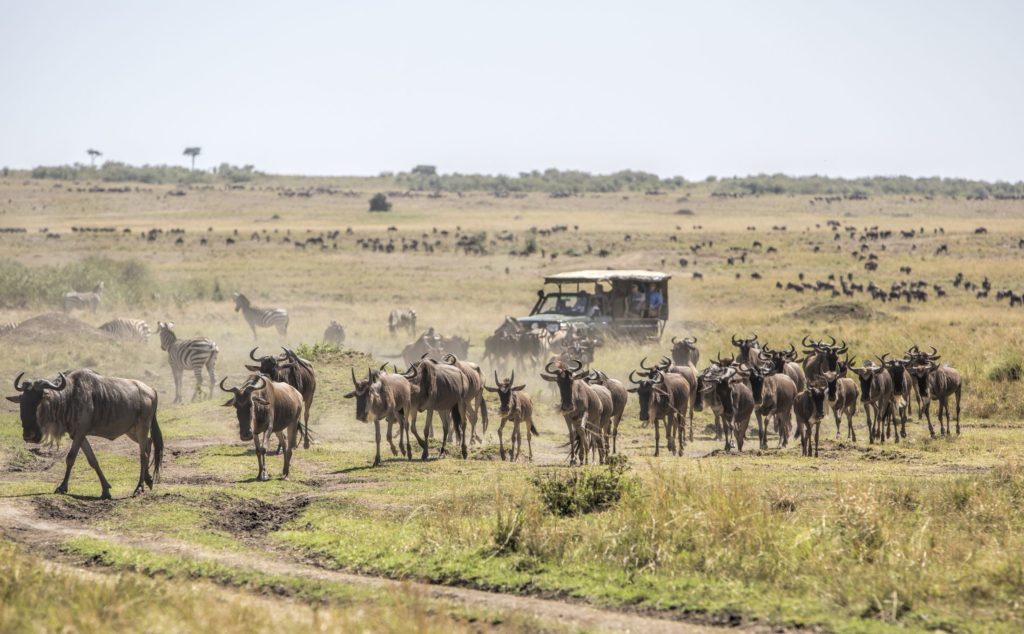 Masai Mara National Reserve is created in 1961 with an intention of it becoming a wildlife sanctuary on a 520 square kilometers together with the present Mara Triangle fortunately, the area was afterwards expanded to the east in 1961 making up to 1,821 square kilometers eventually prompting it to be turned into a game reserve in Narok County in Kenya connected to Tanzania’s Serengeti National Park.

The reserve got its name from the Maasai people who are believed to be the ancestral inhabitants of the land and their description of it when looked at from afar: “Mara” in Maa (Maasai language) means “spotted,” a beautiful description for the collection of trees, shrubs, savanna, and cloud shadows over the Mara land. This effort name the reserve Masai Mara was to honor the Masai people and their culture for preserving their cultural norms and beliefs despite the wildly spreading westernization amidst the different ethnic tribes of the African origin and continent in general.

The reserve boasts with wildlife like lions, leopards, elephants, antelopes, hyenas, zebras, giraffes, hippos, baboons, buffaloes and cheetahs among others and the annual migration of zebra, Thomson’s gazelles, and wildebeest to and from the Serengeti every year from July to October is what attracts more visitors to this reserve including an estimated 470 bird species like the Ostrich, Grebes, Pelicans, Storks, Ibises and Spoonbill, Lilac-breasted Roller, long-billed pipit, bare-faced bird, rufous-crowned roller, Eastern plantain-eater, Secretary Birds, Kori Bustards, Ground Hornbills, and Crowned Crested Cranes among others.


Wildlife of the Mara

Animals
The Mara boasts with the abundance of wildlife game which include the lions, cheetahs, buffaloes, antelopes, elephants, leopards, warthogs, hyenas, African wild dogs, giraffes, silver back jackals, wildebeests, Thompson’s gazelles, hippos, zebras, baboons and crocodiles among others usually found grazing on the vast land and around the Mara River.

Birds
A total of about or more than 470 bird species are believed to be in Mara Reserve including the Ostrich, Grebes, Pelicans, Storks, Ibises and Spoonbill, Lilac-breasted Roller, long-billed pipit, bare-faced bird, rufous-crowned roller, Eastern plantain-eater, Secretary Birds, Kori Bustards, Ground Hornbills, Crowned Crested Cranes, the Goliath Heron, Grey Heron, Black-headed Heron and Great White Egret are some of the commonly spotted birds within the Mara triangle, an area with bird concentration.


Game Drives
Just like any other park/reserve in the world, a visit to Mara reserve is considered incomplete without a game drive which are carried out in the morning, afternoon or at night to view the nocturnal game like leopards, hyenas and lions. But the following can be easily spotted during daytime game drives; silver back jackals, wildebeests, Thompson’s gazelles, hippos, zebras, baboons, elephants, buffaloes, giraffes and crocodiles spread all over the Mara shrubs, forested areas and water catchment areas.

Bird Watching
Birdwatching is an enjoyable activity while in Mara for the bird lovers because it exposes them to the different bird species, nature and their way of life as you enjoy picturesque moments with birds like the Kori Bustards, Ground Hornbills, Crowned Crested Cranes, the Goliath Heron, Grey Heron, Black-headed Heron and Great White Egret commonly spotted around wetlands and forested areas of the reserve.

Guided Nature Walks
To get to understand and exhaust the Mara ecosystem, guided nature walks are in place but of course in the company of a well-trained game ranger who guides you through the demarcated trails via swamps, forests and landscapes as you view the scenic gigantic Mount Kilimanjaro and its surroundings.

Bush Camping
Getting a little wild out here in Mara is unavoidable given its natural beauty, strategic location close to the gigantic Mount Kilimanjaro known for being Africa’s highest peak makes it a perfect camping destination as couples, family, friends, workmates or classmates.

Cultural Visits to the Masai Settlements
Experience a life changing moment by enjoying a cultural encounter with the Masai warriors in several of their dotted villages as you study about their lifestyle, foods and culture among other things. Communal dances are part of their entertainment life especially under the dawn with a burning fire place set to provide warmth and heat which you are free to join then you have a chance to tour their homesteads made out of mud, sticks and grass often smeared with cow dung to prevent dust.

Hot Air Baloon Safari
Experience the panoramic views on Masai Mara while flying in a hot air balloon and be sure to spot wildlife game like elephants, gazelles, buffaloes, giraffes and zebras among others not forgetting the scenic landscape accompanied by the glowing mighty Mount Kilimanjaro from the other side of Tanzania.

There is no need to skip exploration of Masai Mara National Reserve and it is actually an abomination to do so it being one of Africa’s greatest safari destinations and Kenya’s top National park, all you must do is call us on +254-713510387 or send us an email to booking@tristarafricaskimmersafaris.com and we’ll be hospitably proud to organize your trip and guide you through the wild Mara rich with Masai culture, the Masai people, wildlife, and nature.