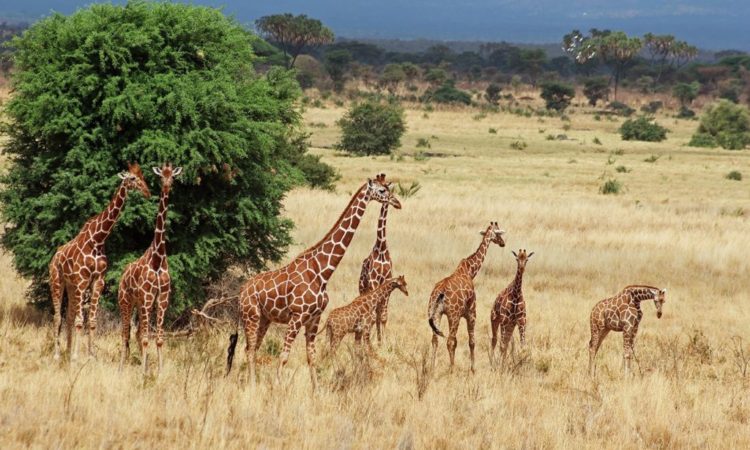 Aberdare National Park stands within the Aberdares mountains about 15 kilometers out of Nyeri County and Nyandarua, and it has been in existence since 1950 occupying 767 square kilometers piece of land with Aberdares which is an old volcanic mountain range bearing lower peaks due to the erosions caused by the heavy rains which lasted for long. None the less, the Aberdares still offers her visitors stunning scenic views of Mount Kenya in the east, Great Rift Valley stands to west with its evergreen vegetation, rugged terrain, deep ravines breaking through its overly forested eastern and western slopes.
From a distance, visitors can still view the clear water streams and waterfalls all combined with attractive peaks including the Le Satima and Kinangop peaks, waterfalls include the roaring Karuru falls 272 meters high, Zaina falls 140 meters and the Gura Falls 305 meters above the ground.
The park is also mostly visited for its historic Mau Mau Caves, Dedan Kimathi hideouts, and the Kimathi “post office” which all played a role in providing refuge to agents of the Mau Mau rebellion used as a spot for dropping messages for fighters at the times of the guerrilla wars in the fight for Kenya’s independence from the British Colonial Government from 1950s to 1960s.

Attractions of the Aberdare

Beautiful Scenery
Naturally, Aberdare National Park is blessed with diverse scenery dominated by Moorlands, Bamboo Forests and rainforests, Aberdare Mountain Ranges which the park is named after ad the waterfalls Karuru being the most popular. All these will blow the visitors’ minds as the photographic beauty is amazingly stunning.


Things to do in Aberdare National Park

Game Viewing
Wildlife Safaris inside the park always brings the visitors closer to experience the numerous wildlife animal species consisting of lions, African forest elephants, side-stripped jackals, blue duikers, the black and white colobus monkeys, Cape buffalo, eland, East African wild dogs, spotted hyena, Olive baboon, reedbuck, bushbucks, common zebra black rhinoceros, leopard servile, rare bongo, giant forest hog, rare wild dogs, mole rat and mole shrew among others through morning, afternoon, full day and night game drives on special request are organized fort the visitors to experience the nocturnal game like lions, leopards and hyenas which may not be easily spotted during daylight game drives in the park. So, visitors can carry with them cameras for capturing their moments while at the park aboard a safari vehicle unless the game ranger advices you to get on ground and the game are common spotted around water holding points of the park.

Primate Tracking
The park is a conducive habitat to primates including the Olive baboons, black and white colobus monkeys and Skyes’ monkeys living in the thick Aberdare and Kikuyu Escarpment forests along the mountain ranges.

Hiking
Adventurers walk on foot from the Elephant hills to the Le satima and Kinangop peaks to the top where you witness the scenic views of the various waterfalls that include the beautiful Karuru falls pouring water from 272 meters, Zaina falls from 140 meters and the Gura Falls from 305 meters not forgetting the parks game like the elephants, primates like the Olive baboons and birds like the Mountain Buzzard as you hike.

Guided nature /Bush Walks
Visitors are taken through guided bush walks penetrating the well-developed trails in the park with a professional ranger guide exposing them to the local flora, fauna and wildlife that vastly occupy the park with photographic moments allowed, the visitors travel back to their lodges and respective home countries with picturesque memories of all kinds.

So if you are not yet decided on which park to visit in Kenya, we suggest you make Aberdare National Park a priority upon your arrival and all you have to do is simply call us today on +254-713510387 or send us an email to booking@tristarafricaskimmersafaris.com and we will plan your mind-blowing safari into this scenic park at a pocket friendly cost.